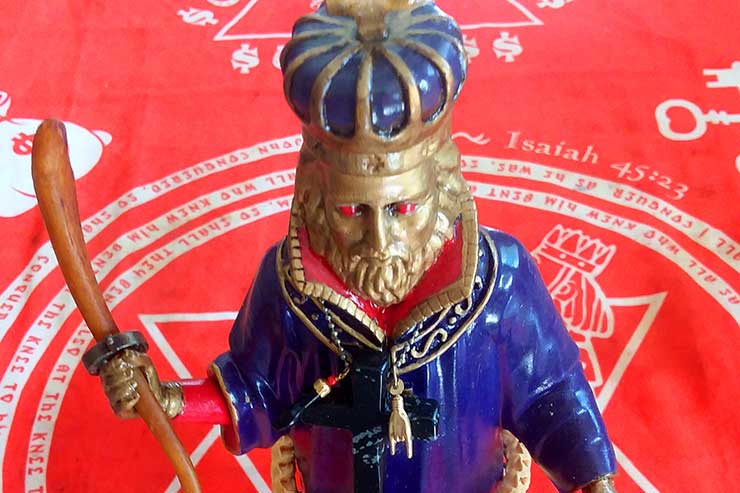 Reconnecting with John the Conqueror

Around the summer of 2017, I was spending a lot of time praying to a Southeast Asian spirit called Phra Ngang, a ribald Cambodian mountain spirit sometimes known as “the Dirty Buddha.” What was weird, though, was that the more late nights I spent lighting incense and chanting mantras to Phra Ngang, the more I seemed to find myself waking up at dawn to read psalms from the Bible as I experimented with various homemade flags, plant golems and mojo bags dedicated to High John the Conqueror, the famed power plant of Afro-American Hoodoo.

So had my newfound enthusiasm for Thai sorcery somehow reactivated a long-dormant connection to High John after decades of neglect? Or did some deep part of me felt the need to mount a creative response to the exotic spectacle of Southeast Asian necromancy based on something I already knew? I have no idea. But as I continued to investigate magical Buddhism, I was shocked to discover that the exotic fetishes I had been collecting featured morally ambivalent spirits and gritty magical recipes almost identical in character and function to the “mojo hands” of Southern rootwork.

Much as Thailand’s “holy idiot” served as a playful, earthy, and necessary counterbalance to the selfless rigors of Buddhist monasticism, so too did “High John” function as a fun-loving jester who slyly spoke truth to the power of an idealized celestial savior – could they be somehow related?

…. Tricksters… perform a unique set of necessary tasks… from enlivening gods that have been deadened by their own purity to negotiating the otherwise necessary and impermeable divide between heaven and earth. It might be right to say that trickster… has a “rudderless intelligence,” but if so it is a useful intelligence, for it continues to function when normal guidance systems have failed…” 1Hyde, Lewis. Trickster Makes This World: Mischief, Myth, and Art. Kindle ed. New York: Farrar, Straus and Giroux, 2010.

Inevitably, I began to wonder: wasn’t the Christian mysticism of hoodoo at least as fascinating, powerful and profound as Southeast Asian magic? I could read Psalms just as easily as I could chant mantras – so why shouldn’t High John have a beautiful golden-faced statue packed with magical herbs and powerful ingredients just like Phra Ngang?

Deep down, our inner Trickster craves to break taboos, revel in the destruction of the known, and shatter decrepit ideologies. If there is anything Trickster archetypes teach us, it is to “lighten up” about life and to not take ourselves so seriously… The power of the Trickster is in his (or her) ability to help us question life, embrace uncertainty and become receptive to seeing everything just as it is.2Luna, Aletheia. “11 Trickster Archetypes That Provoke and Heighten Your Consciousness ⋆ LonerWolf.” LonerWolf. March 08, 2019. Accessed April 05, 2019. https://lonerwolf.com/trickster-archetypes/

Temporarily fleeing the destructive path of Hurricane Irma, I spent early September pondering these and similar mysteries from a hotel room in Alabama; returning to Miami Beach to find myself without electricity or internet access, I resigned myself to silently reading the Bible in my apartment for the next two weeks, the nocturnal gloom interrupted only by the flickering light of a half-dozen candles.

I’d spent dozens of hours over the preceding months tracking down and translating the chanted prayers for the various Thai amulets and statues in my collection, but as it gradually it sank in for me that most of these “katas” were simply remixes of various Buddhist sutras, the centrality of psalms in the parallel American practice of hoodoo began to make a lot more sense.

In order to be able to receive the secret knowledge… it is believed one has to… read the bible with the eyes of the Spirit. Spirit will reveal the works in the bible. The works will either be instructional… or they are meant to be recited either alone or over one’s work.

… if you want to learn bible works, this sacred black gnosticism, then you need to take out your bibles and read it. You need to pray that Spirit reveal these works to you.

People have no idea how much power is in bible. Every single work imaginable can be found within it’s pages, from works to bring money and prosperity, for protection, for love, for reversing work, to keep a spouse faithful, to dominate others, to make one invisible in a sense, and yes, even work to bring about the death of one’s enemies. This is one of the reasons why hoodoo and Christianity are firmly linked. It’s about the power. Unless a worker gets into the bible then they are not truly tapping into the power of hoodoo.” 3Conjure, Doc. “The Demoniacal.” The Hoodoo Truth: Hoodoo As “Black Gnosticism”, Jan. 2012, thedemoniacal.blogspot.com/2012/01/hoodoo-truth-hoodoo-as-black-gnosticism.html

Suddenly on October 3, 2017, the spirit descended with an insistence and urgency I couldn’t put off and I spent the afternoon loading and charging a repainted “High John” statue with dozens of ingredients chosen on the spot. Feverishly reading Psalms for deliverance, protection and success, I stumbled to my feet as the dying light of the sun cast its last rays through my window, rapt with awe at the ominous being I had just given birth to.

High John de Conquer was a bottom-fish. He was deep. He had the wisdom tooth of the East in his head. Way over there, where the sun rises a day ahead of time, they say that Heaven arms with love and laughter those it does not wish to see destroyed. He who carries his heart in his sword must perish. So says the ultimate law. High John de Conquer knew a lot of things like that. He who wins from within is in the “Be” class. Be-here when the ruthless man comes, and be here when he is gone.4Hurston, Zora Neale. “High John Da Conquer.” https://www.fadedpage.com/books/20190457/html.php

“Holy Shit, Rob!” I exclaimed to a friend. “Oh my God! You won’t believe what I made! It’s a fully loaded and charged, honest-to-God, John the Conqueror fetish! It has human bones in it and everything! You can literally FEEL this thing, it’s a fucking BEAST!”

Studying the pictures I’d texted him, he chuckled in appreciation. “Wow man, I’ve never seen anything like this – it feels like the culmination of everything you’ve been talking about for the last two years. It’s almost like an nkisi (Palo fetish) though obviously, you can’t call it that. What’s with the golden face and the red eyes?”

“Well,” I responded, “you’re the one who explained to me that most people who practice hoodoo look at High John as nothing more than an ingredient, right? It’s something they add to spells for protection or love to amplify their power. But the real purpose of John the Conqueror was always to help the slaves maintain their dignity and integrity in the middle of soul-crushing conditions…”

“And since there’s no template for this, I just had to follow my inspiration and do what the spirit was telling me to do, so what I did was hollow out the base of one of those resin statues you can get on amazon, and paint the face gold and the eyes red – that’s a nod to Thai barang by the way, the gold face is to show that he’s filled with loving-kindness, and the red eyes are to show that he’s fierce.

And then I just let him tell me what to load him with, the idea of replacing the scepter in his right hand with a coon dong and putting a rolled up $2 bill in his left hand, I can’t even tell you where that idea came from, it just came to me.

In a way it’s like that Zora Neale Hurston story, right? Where High John makes a bet with the devil, and if he loses, he loses his eternal soul, but if he wins, he gets to marry the devil’s daughter. And of course, through all kinds of trickery he does win, and he runs away with Lilith and becomes the mayor of Hell.5Universe, Voodoo. “High John the Conqueror Root and the Mayor of Hell.” Voodoo Universe, 24 Apr. 2014, www.patheos.com/blogs/voodoouniverse/2014/04/high-john-the-conqueror-root-and-the-mayor-of-hell/ He’s a malandro!6“Malandro.” Malandro – Wiktionary, en.wiktionary.org/wiki/malandro. A young criminal, punk or thug in Venezuela or Brazil; one conscious of image and status, preoccupied with projecting coolness and non-conformity, and willing to use violence to establish social status”

“There’s a movie I want you to see, Alex,” replied Rob laconically. “Check out ‘Petey Wheatstraw, the Devil’s Son-In-Law,” it’s a Rudy Ray Moore blaxsploitation flick from the 1970s, trust me, it’ll blow your mind, it’s basically just a retelling of the story of High John.”

Over the next few days, I took in Rudy Ray Moore’s profane antics with growing interest as I rushed to complete bizarre devices whose dreamlike blueprints continued to impress themselves upon me unbidden: a pendulum based on a super-magnet, a two-headed alligator which ate bad luck and vomited forth good luck, a combination monkey’s paw and hand of glory designed to grab opportunities and money…

“Holy crap, Rob! It says right in the movie, right during the opening sequence – High John was born DURING THE GREAT MIAMI HURRICANE!”

“Yeah, well High John wanted you to bring something new into the world and you really went deep, with all these weird  inventions you came up with, you almost have the makings of a whole new tradition here – it’s like you’ve reimagined High John as an American Phra Ngang…

Now here’s something most people don’t understand – High John is a debt-breaker, he cancels contracts. When the Africans sold their prisoners of war, and the slavers transported them to the New World and the plantation owners bought them and forced them to work, that was all perfectly legal, right? Everyone involved in the whole supply chain was just following the rules as they existed at that time. But High John doesn’t give a fuck! Because there’s something more important than following rules and traditions – FREEDOM!!!!

Anyway, I guarantee you’ll catch a lot of shit for this stuff from the Hoodoo community, and a lot of these same whiners will even try to copy what you’ve done here and claim it as their own – but that’s OK, you just have to put it out there anyway and not give a fuck.”

So that’s exactly what I did. Om High John, mali ma ma!