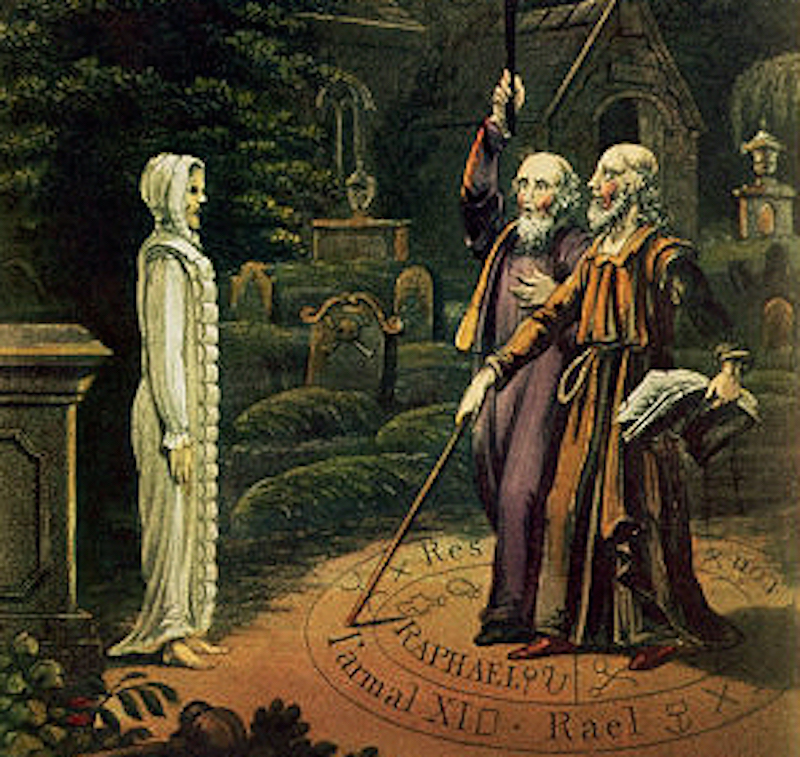 The term “necromancy” comes from European sorcery, where it was originally “nigromancy” – a type of dark magic focused on summoning demons into blood drenched circles and triangles, accompanied by lengthy prayers in Latin.

Over the centuries, “nigromancy” evolved into “necromancy” and came to mean any kind of magic or divination involving the human dead, including (technically, anyway):

Both “necromancy” and “nigromancy” carry a pretty strong charge – they’re scary-sounding words! – but it’s also worth noting that this strong distaste for the dead is almost purely a Western thing – there’s much less of a taboo attached to working with spirits in most of the world’s tribal cultures, where the deceased are simply part of a larger animist worldview in which everything is alive and has intelligence, from stones and plants to waterfalls and even stars.

In the context of conjure, all these ideas and concepts ultimately have their roots in the tribal magic of the Kongo people of Central Africa, where indigenous beliefs about:

…when the Kingdom of Kongo was Christianized by Portuguese missionaries in the 14th century, long before the plantation system had even developed in the New World.

With the introduction of the slave trade, Bantu-Kongo metaphysics  – including ideas about spirit contact, ancestor worship and  the power of graveyard dirt – were imported to the Americas and became fused with Baptist Christianity, giving birth to the magico-religious system eventually known as Hoodoo, Conjure or Rootwork.