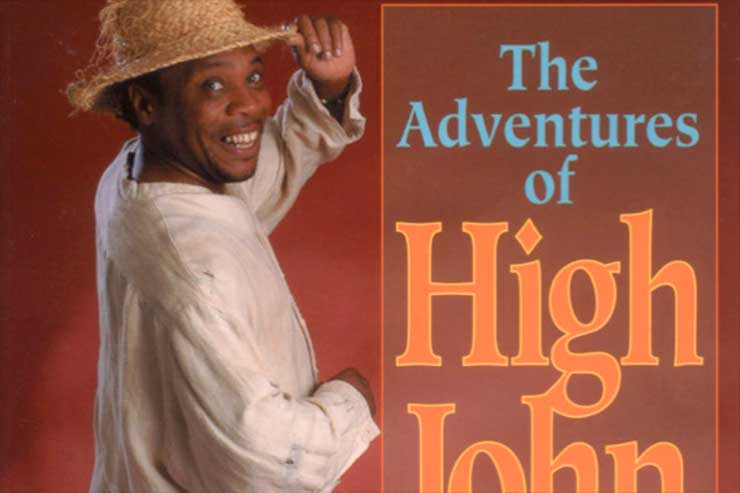 Welcome to the online shrine of High John the Conqueror, an African-American cultural hero whose boundless optimism, wry sense of  humor and cheerful pursuit of his own desires allowed him transcend the horrors of plantation life while inspiring those around him with courage, hope and a deep-grained resistance to the psychic corrosion of slavery.

And all the time, there was High John de Conquer playing his tricks of making a way out of no-way. Hitting a straight lick with a crooked stick. Winning the jack pot with no other stake but a laugh. Fighting a mighty battle without outside-showing force, and winning his war from within. Really winning in a permanent way, for he was winning with the soul of the black man whole and free. So he could use it afterwards. For what shall it profit a man if he gain the whole world, and lose his own soul?

Some say John had been a prince in Africa, spirited away on  a slave ship to be sold to a dull-witted “Massa” on a Louisiana cotton farm; rather than commit suicide, he instead summoned up the will to live and made the best of his situation through a combination of bravado, cunning and charm.

In this guise, John lives on as a folkloric trickster figure, the common ancestor of Dolemite and Bugs Bunny alike:

Yes, I’m Petey Wheatstraw – the Devil’s Son-in-Law!
The High Sheriff of Hell – I went with notorious Fanny, and even made love to old Lulubell!
I took today back from yesterday, took the 4th of July and put it in June – and made leap year jump over the moon!
I’m not here to brag, nor here to boast – I can sit on a tombstone and produce baby ghosts!
Well, I can even remember the day I was born – it was the day of that great Miami, Florida storm!
Release yourself!

When the human John died, his soul went back to Africa and his spirit entered the root of the Ipomoea Jalapa plant (a relative of the common Morning Glory). Here he became a powerful ally to spiritual workers the world over, inspiring countless spells of seduction, domination, luck, protection and fortune.

Whether as a plant spirit or as a folkloric trickster, John has a strong personality and “vibe” which is impossible to miss once you learn to recognize it; equal parts funny, ballsy, wise and practical, John never confronts bullies directly, instead maneuvering his opponents into making fools of themselves.

As a friend once explained to me:

High John is BIG spirit… he’s way more than just an ingredient in mojo bags and hoodoo spells. His REAL gift was showing the slaves how to cultivate humor, joy and a sense of inner freedom in the middle of system designed to crush their spirits – that’s what saved them, that’s how they were able to stay human…

And so, is in that spirit that I have assembled this modest offering. May John the Conqueror bless you too!