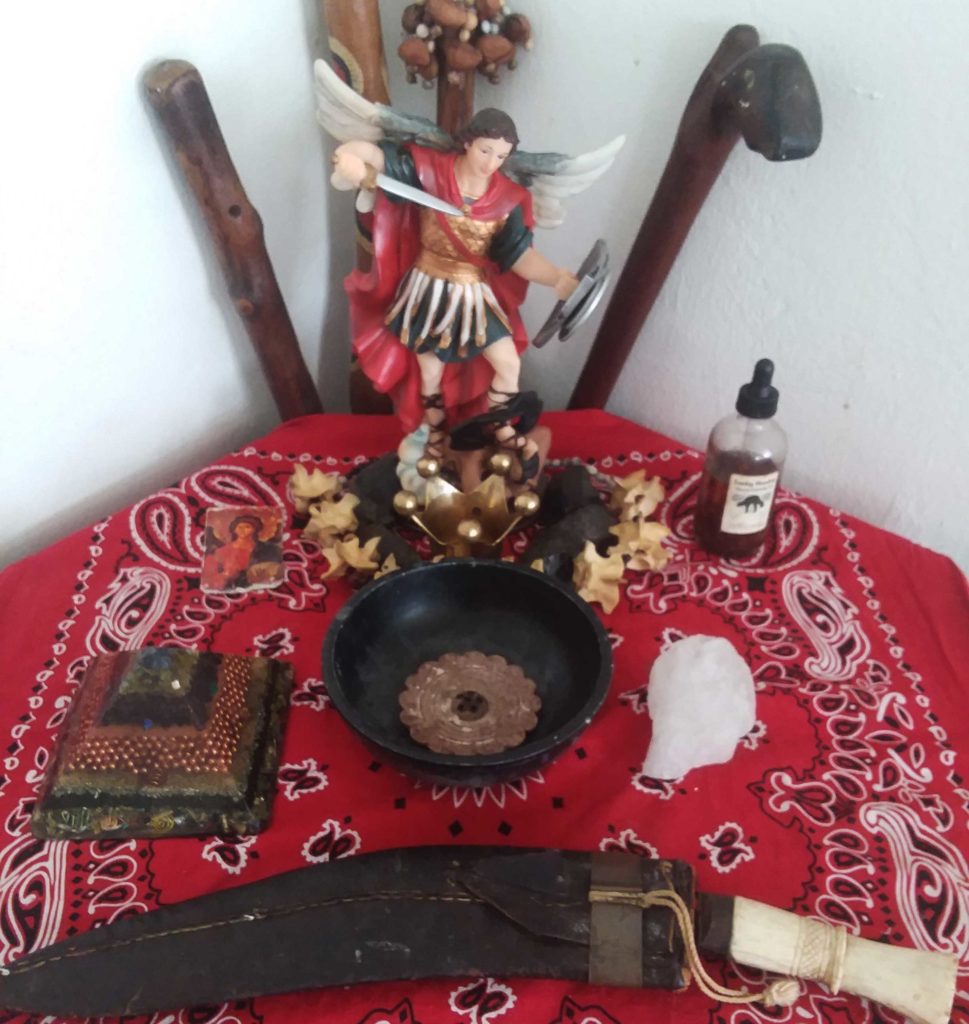 How to build a Shrine to St. Michael & the Dragon 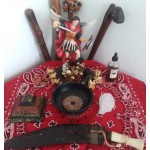 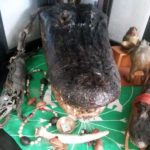 When I got scratched into Palo years ago, a friend took me aside in the parking lot of a Denny’s afterwards so that we could speak in private. “The dead wanted me to tell you,” he began:

…that you are from the light. I know you’ve been playing with the darkness and with dark spirits for a long time, but that’s not what you’re aligned with and meant for on the deepest level. Some people are, and that’s OK, but you’re not.

Remember, the light isn’t weak – it’s actually stronger than the darkness in a lot of ways. The light can illuminate, but it can also burn.

I’ve thought about that brief conversation – and the balance it takes to work spiritual energies without going crazy – many times in the years since. Dark energies in particular can be extremely disorienting and lead to a type of ego inflation that wrecks many people on the rocks of their own blind spots.

Because of that, I’ve really come to appreciate St. Michael and the force he represents – the burning light of the sun that conquers and defeats all evil and darkness – the ultimate “Yang” energy to counterbalance the cold, dark, constricting energies of the Biblical dragon’s “Yin.”

Because I do see these forces as representing a sort of engine whose parts work together in harmonious interplay, I set up my St. Michael altar on top of a cabinet that I keep an alligator head in (along with a few other creepy crawly things), and in truth I have found that they work together beautifully.

The alligator and his friends are great at works that require the ability to ruthlessly bite down, while St. Michael oversees everything else, vigilantly defending my home from the forces of darkness and especially deception – lying charmers, fast-talking conmen, and the sorts of disingenuous people for whom I have always had an inexplicable weakness.

As a practical matter, St. Michael gets red candles with “Fiery Wall of Protection” oil on a regular basis, along with lavender incense and the well known prayer from Pope Leo XII :

St. Michael, the Archangel, defend us in battle.
Be our protection against the wickedness and snares of the devil.
May God rebuke him, we humbly pray; and do you, O Prince of the heavenly host,
by the power of God cast into hell Satan and all the evil spirits
who wander about the world seeking the ruin of souls. Amen.

The alligator head gets tea lights and a raw egg or two when I need help from a spiritual debt collector, along with dragons blood incense and a reading from Job 41:

Can you pull in Leviathan with a fishhook or tie down its tongue with a rope?
Can you put a cord through its nose or pierce its jaw with a hook?
Will it keep begging you for mercy?
Will it speak to you with gentle words?
Will it make an agreement with you for you to take it as your slave for life?
Can you make a pet of it like a bird or put it on a leash for the young women in your house?
Will traders barter for it? Will they divide it up among the merchants?
Can you fill its hide with harpoons or its head with fishing spears?
If you lay a hand on it, you will remember the struggle and never do it again!
Any hope of subduing it is false; the mere sight of it is overpowering.
No one is fierce enough to rouse it.
Who then is able to stand against me?
Who has a claim against me that I must pay?
Everything under heaven belongs to me.

I will not fail to speak of Leviathan’s limbs,
its strength and its graceful form.
Who can strip off its outer coat?
Who can penetrate its double coat of armor?
Who dares open the doors of its mouth,
ringed about with fearsome teeth?
Its back has rows of shields tightly sealed together;
each is so close to the next that no air can pass between.
They are joined fast to one another; they cling together and cannot be parted.
Its snorting throws out flashes of light;
its eyes are like the rays of dawn.
Flames stream from its mouth;
sparks of fire shoot out.
Smoke pours from its nostrils as from a boiling pot over burning reeds.
Its breath sets coals ablaze, and flames dart from its mouth.
Strength resides in its neck;
dismay goes before it.
The folds of its flesh are tightly joined;
they are firm and immovable.
Its chest is hard as rock,
hard as a lower millstone.
When it rises up, the mighty are terrified;
they retreat before its thrashing.
The sword that reaches it has no effect,
nor does the spear or the dart or the javelin.
Iron it treats like straw
and bronze like rotten wood.
Arrows do not make it flee;
slingstones are like chaff to it.
A club seems to it but a piece of straw;
it laughs at the rattling of the lance.
Its undersides are jagged potsherds,
leaving a trail in the mud like a threshing sledge.
It makes the depths churn like a boiling caldron
and stirs up the sea like a pot of ointment.
It leaves a glistening wake behind it;
one would think the deep had white hair.
Nothing on earth is its equal—
a creature without fear.
It looks down on all that are haughty;
it is king over all that are proud.