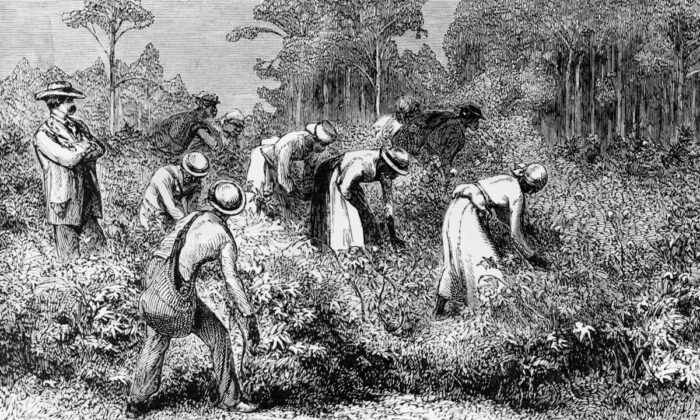 Every culture seems to have its own definition of “black” and “white” magic; a few I’ve encountered over the years:

While conjure doesn’t fit neatly into any of these binary categories, it’s still kind of interesting to think about how it evolved and what that means in the larger sense. For example, many conjure techniques and concepts like:

…originate with the Bantu people of Central Africa, and so reflect the survival concerns of indigenous tribal life: fertility, warfare, hunting, healing and community stability. In that sense they are definitely practical.

Examined thorough another lens, we can think about the survival concerns of the slaves who developed conjure in the US:

Obviously, philosophical concerns about “respecting other people’s boundaries” were probably not the first priority for a group of traumatized kidnap victims being forced to pick cotton at gunpoint.

A final consideration is that by the time of the Civil War, most slaves in the American South were Christian – believers in grace, salvation, and divine power – so technically they were practicing a form of “high magic” when they prayed (whether the slave-masters approved of their prayers or not):

“On Sundays the slaves were permitted to have a religious meeting of their own. This usually took place in the backyard or in a building dedicated for this purpose. They sang spirituals which gave vent to their true feelings. Many of these songs are sung today. There was one person who did the preaching. His sermon was always built according to the master’s instructions which were that slaves must always remember that they belonged to their masters and were intended to lead a life of loyal servitude. None of the slaves believed this, although they pretended to believe because of the presence of the white overseer. If this overseer was absent sometimes and the preacher varied in the text of his sermon, that is, if he preached exactly what he thought and felt, he was given a sound whipping.”1William Ward, born a slave in the early 1830s in Georgia, as reported by her interviewer, ca. 1936

Thus, much in the same way that the “masters” of the feudal planter class used the Bible to justify their dominance over the slaves as inferior, “cursed” beings, African slaves found in the Old and New Testaments both a source of inner freedom and a framework around which to structure their own traditions of folk healing, including:

In the end, it feels to me like conjure is just too large to be contained by any of these categories – so maybe it isn’t “black” or “white” at all, but simply African-American.